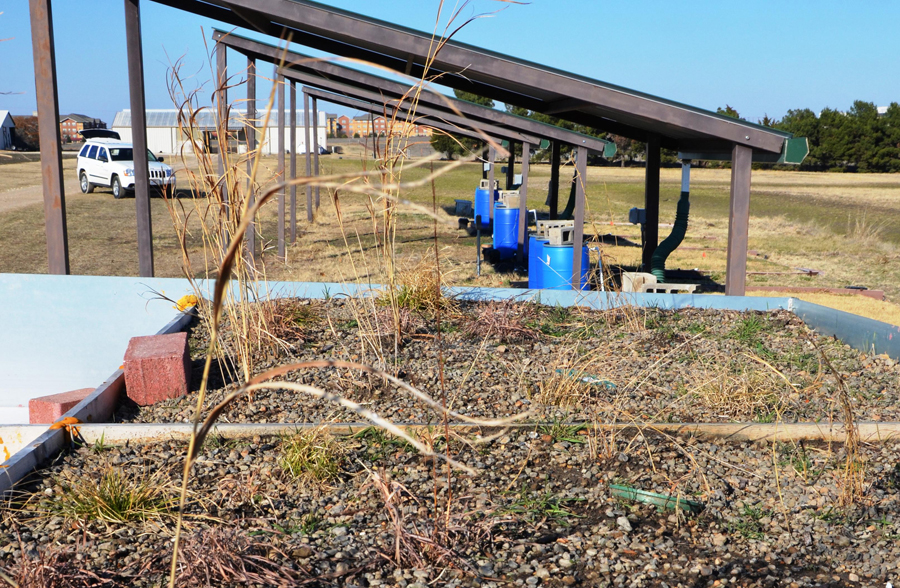 The results of stormwater practice demonstrations at the Texas A&M AgriLife Research and Extension Center in Dallas demonstrate the potential benefits for using such practices in urban areas statewide, an expert said.

“Because much of the land in urban areas is paved or covered by other impervious structures, typical filtration and purification done by soil and plants has been sidestepped,” said Dr. Fouad Jaber, Texas A&M AgriLife Extension Service specialist in integrated water resources management. “So bacteria, sediments, oil, grease and chemicals from yards, roads and parking lots and elsewhere end up running off directly into watershed areas.”

Jaber said to help address this problem, he has been testing low impact development practices, including permeable pavements, green roofs and a bioretention-rain garden area.

Low impact development, or LID, is a stormwater management approach using innovative planning and engineering in concert with conservation and nature to protect water quality. In testing these practices at the center, Jaber established methods to monitor and measure their effects on hydrology, nitrogen, phosphate, total suspended solids, bacteria and other pollutants.

Evaluation was done in a field setting with soil comparable to that of the Blackland region and much of the southern U.S.

“Up until  now, there hasn’t been much data to show how adopting LID practices on a watershed scale in urban areas may help reduce flooding and improve overall water quality,” Jaber said. “Now, after two years of testing, we have initial data demonstrating the value of these practices.”

Jaber said data gathered from early 2013 to the end of March 2015 and applicable to the Upper Trinity-White Rock Creek Watershed would also translate to other urban U.S. watersheds.

“What we found was that if there was a rain event of 1.5 inches or less, which is typical in this area, by using these practices, 50 percent of the water stays in the soil and either infiltrates or evaporates, 40 percent leaves through a drainage pipe after being filtrated by the soil and only 10 percent overflows untreated.”

One of Jaber’s tests was to determine how effective permeable pavement would be in reducing runoff water volume and pollutants. In a simulated parking lot area at the center, he installed various pavement types, including interlocking concrete blocks, grass pavers, pervious concrete, permeable asphalt and regular concrete.

Twenty-five experimental stalls, each measuring 8 feet by 10 feet, were installed among 52 total functional stalls. Each permeable pavement was 16 inches thick with a gravel layer and perforated under-drain pipes. Stalls were hydrologically separated by concrete curbs.

At another center site, Jaber has been testing green roofs — roofs covered by a growth medium and planted with vegetation — each with a waterproof membrane, root barrier and drainage area. The site has four green roofs, each 100 square feet in area and divided into four sections, with three of the roofs covered with native North Texas plants.

At another site, a bioretention-rain garden area collects runoff from a 37,000-square-foot parking lot at the center. Using 4 feet of a mixed medium, the retention area has been populated with native plants. A 4-inch perforated pipe has been placed at the bottom for drainage. An adjacent rain garden bed is planted with perennial and annual natives to promote water absorption and filtration.

“The large number of storms that occurred in Texas in March through May resulted in flooding that caused loss of life and property damage across the state,” Jaber said. “And while individual storm events were not very large, the frequency of these events was very high. This saturated the soils and caused flash flooding from even small subsequent rain events.”

He said despite the fact that LID practices at the Dallas center were designed to handle small rain events, during this three-month time period they were able to prevent a large portion of the water runoff from leaving the property.

Jaber said these results show that if similar practices were widely adopted in Texas cities, the loss of life and property from frequent rain events could be considerably reduced.

To arrange a tour of the LID sites at the Dallas center or for more information, contact Jaber at 972-952-9672 or [email protected]

The low impact development practices being tested on the campus of the Dallas center were funded by a Clean Water Act urban nonpoint source pollution prevention program through the Texas Commission on Environmental Quality and the U.S. Environmental Protection Agency. Texas A&M AgriLife Research also provided funds, as well as the locations for constructing the best management practices sites.