From Sachse to off-Broadway 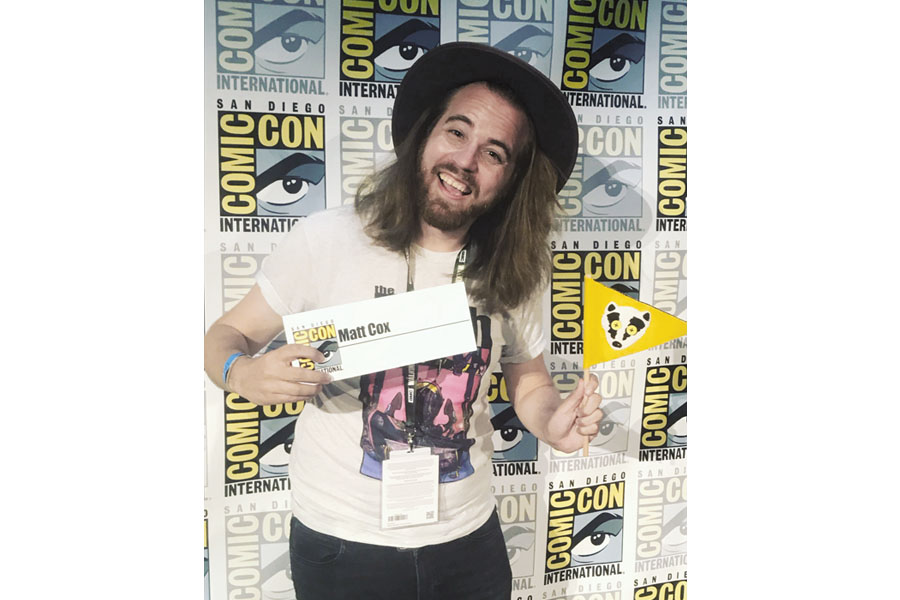 What began as a small-scale comedy that only a few dozen New Yorkers were likely to see has exploded into an off-Broadway hit with thousands of fans.

“Puffs,” now in its third year of production, is an unofficial parody of “Harry Potter” events from the perspective of the background characters. It aims to demonstrate how everyone has a voice and a place where they belong, according to playwright and Sachse native Matt Cox.

“I was definitely a fan of a ‘certain boy wizard’ as the books were coming out,” he said. “I was at the perfect age where I grew up alongside the characters. We call ‘Puffs’ ‘a play for anyone never destined to save the world.’ I tend to write stories that highlight the underdog, and this world of wizards was ripe for a good underdog story – one that highlights how we all have stories worth telling. Also, I thought it would be a lot of fun to give some (long overdue) recognition to the Puffs of the world.”

The play tells the story of a boy named Wayne who is sent to a wizard school. Although he dreams of becoming a hero, he gets sorted into what he deems the least heroic house: Puffs. With his best friends Oliver and Megan, Wayne gets entangled in physical battles while also fighting for his place in a world where he feels insignificant.

Cox’s love for acting began in high school. He joined the theatre department his senior year, performing in “You Can’t Take It with You” and “Cain: A Mystery.” His passion for writing began even earlier and he fine-tuned his skills by writing for the school newspaper and yearbook.

After graduating from Sachse High School in 2007, Cox studied theatre at Tarleton State University and received his bachelor’s degree in 2011. From there, he moved to New York to take classes at the Stella Adler Studio for Acting and the Upright Citizens Brigade.

Within four years of moving, “Puffs” was written and staged.

It only took Cox two weeks to write the first draft, but he has revised it multiple times since 2015.

“I like to dive right in usually, and find out where the story wants to go as I work,” he said. “I don’t usually do outlines or begin with an idea of where it might wind up. Then, when it gets into a rehearsal room, I tend to write and rewrite a whole lot more to match the energies of the actors and find what’s fun for them and what will be fun for the audience.”

The People’s Improv Theatre picked up “Puffs” in late 2015. The original plan was for it to run six shows, with a possible extension of five more if it had a good turnout. A website published an article about it that caused performances to sell out, and the response was so enthusiastic that the show continued until August 2016.

At that point “Puffs” moved to the Elektra Theatre in Times Square, where it stayed for almost one year until New World Stages, an off-Broadway theatrical complex, invited the show to one of its theatres. It is currently still running at New World Stages.

Between May and August 2018, “Puffs” also ran in Melbourne, Australia.

In addition to writing the script, Cox also designed the sounds for his play. His duties are mostly finished now that it has been performed so many times, but he still visits for the occasional tweak or just to visit the cast and crew.

“It is always very nerve wracking (to see it performed) – you immediately doubt all the decisions you’ve made and wonder if anyone will enjoy it,” he said. “I’m always so happy to hear people say how much they enjoy it, or that they quote it, or how they related to it in a special way. We have really wonderful fans, and I am always amazed this little show that could is still getting the chance to make people laugh.”

He also hopes that people leave with a renewed sense of purpose. Cox explained that just as protagonist Wayne must discover his own importance, audiences should be reminded that everyone has a story to tell.

The story of “Puffs” had another big development at the end of November. A performance was filmed live and is available for purchase on Amazon and iTunes. Amazon users also have the option of buying the script.

According to Cox, the talent of the cast and crew helped make the show successful. He has worked with director Kristin McCarthy Parker and several of the actors in the past, and enjoys all the friendships within the company.

As for his future plans, he is in the process of developing two new plays. One is a comedy called “Witches!? In Salem?!” and the other is a western entitled “The Magnificent Revengers,” in which the audience will help decide the plot.

“I’ve definitely learned the power of surrounding yourself with friends who are willing to believe in something,” Cox said. “We all did this mostly as a labor of love, with no expectations of what it would grow into. But everyone put so much care into it, making it what it became. With lots of help, amazing things can happen.”

Gov. Greg Abbott announced additional agenda items to be added to the third called session, which began Monday, Sept. 20. The announcement came Sept. 22 after Abbott submitted a message to the Secretary of the Senate identifying the items. The first additional item is...

END_OF_DOCUMENT_TOKEN_TO_BE_REPLACED

Sachse City Council authorized the city manager to execute a contract for the Hudson Drive Extension and approved the Economic Development Corporation’s plan to demolish several buildings in the Fifth Street district. During the Sept. 20 meeting, council also approved...