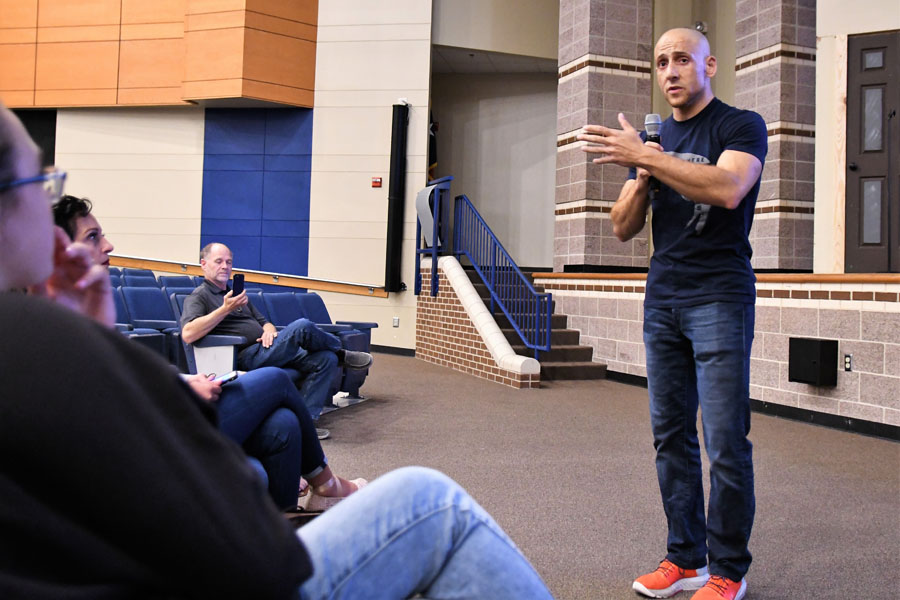 Sachse residents got to hear a firsthand account of survival and hope.

Speaker and filmmaker Kevin Hines visited the community Tuesday, Sept. 3 to tell his story. In 2000, he jumped off Golden Gate Bridge but survived, and now travels the country speaking about mental health.

He was originally scheduled to visit Sachse in May, but was prevented due to an injury.

Most of his presentations center around the idea that recovery is possible. He begins by describing his suicide attempt and his battle with bipolar disorder.

When Hines jumped off the bridge, he fell 25 stories in four seconds and broke several bones. A sea lion helped keep him afloat while waiting for the Coast Guard to arrive, and he eventually regained the use of his legs.

Only 35 other people have survived falling from Golden Gate Bridge.

The PTAs of Armstrong and Sewell Elementaries, Hudson Middle and Sachse High all worked together to bring Hines to town. Garland ISD’s Living Intervention and Guidance for Healthier Teens (LIGHT) program, which uses prevention, intervention and support for struggling students, also played an integral role in the event.

Teri Holamon, responsive services counselor for GISD, worked as a LIGHT counselor for SHS last school year and headed up efforts to spread the word about Hines’ speaking engagement.

“Suicide seems to have touched everyone’s lives,” she said. “Almost everyone has some kind of story about someone. Being educated on this is so important. If it were a medical illness, we’d have researchers on it all the time. We’re trying to get rid of the stigma on mental health.”

According to the Center for Disease Control, one in eight high schoolers attempted suicide in 2017. It’s the second leading cause of death for Texans between the ages of 10 and 24.

Hines has videos available on YouTube and his documentary, “The Ripple Effect,” is available on iTunes, Amazon Video, VUDU and Google Play. He also released a memoir called “Cracked Not Broken: Surviving and Thriving After A Suicide Attempt” in 2013.

For more photos, see our Sept. 12 issue or subscribe online.