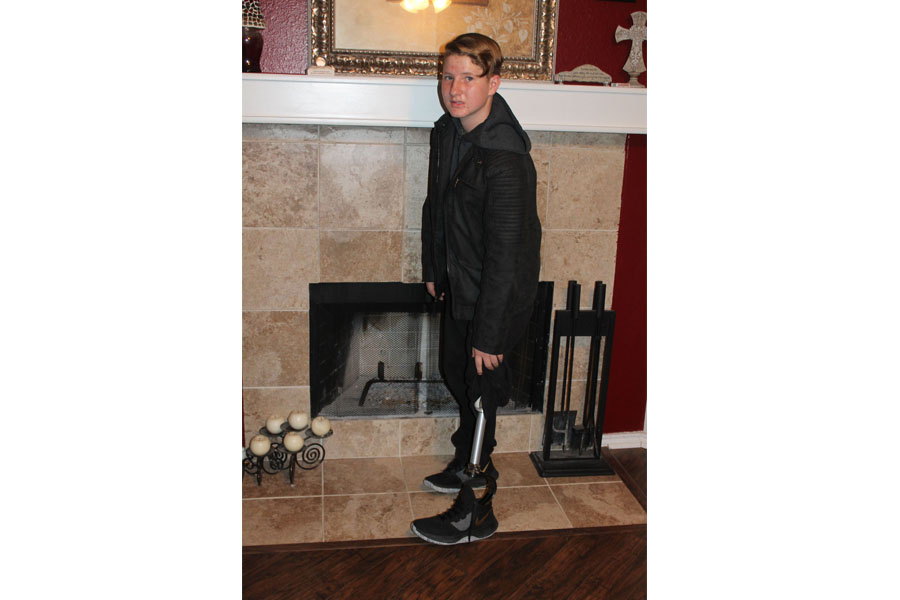 Thanksgiving may be over, but the Hartman family still has plenty to be thankful for.

Nov. 21 marked the four-year anniversary of a day that changed their lives. Jeremiah Hartman, 9 years old at the time, was on his way to a haircut at Firewheel when a car jumped a curb and pinned him against a wall. Thirty-six surgeries and more than 100 blood transfusions later, he is missing a kidney and half of his left leg, but has a brand-new outlook on life.

“Even though life gets hard, you can’t just quit,” he said.

Now in eighth grade at Burnett Junior High, Jeremiah has adjusted to life as an amputee. He received the newest of eight prosthetic legs on Nov. 14 and uses a wheelchair to get around Burnett. Although it took him a while to get used to wearing a prosthetic, it doesn’t bother him as much now – he likes to joke that he can “stub his toe” all he wants. An advantage to using the leg is the ability to participate in sports.

They’re replaced whenever he grows; the prosthetics don’t lengthen with his body, which can lead to painful rubbing when they get too small.

Being an amputee creates a dichotomy of independence and reliance on others. Initially Jeremiah needed his mother Bridgett Hart to assist him with everything from getting dressed to taking a shower. Now, though, he can do most things for himself. He can even manage to get around the house by hopping on his good leg.

Similarly, Bridgett also learned to accept her lack of control. She depended on others for food and childcare while Jeremiah was in the Intensive Care Unit. Her best friend took care of her daughter Rebecca, now a sixth grader at Firewheel Christian Academy, because she spent most of her time at the hospital. Hundreds of friends, family members and even strangers raised funds to pay for Jeremiah’s care. And Lowe’s donated hardwood floors (necessary to make the Hart home wheelchair-friendly) and two wheelchairs.

But what helped the most was his faith.

“It happened for a reason and is part of God’s plan,” he said. “I just need to figure out what it’s for. I’ve died three times. I went to heaven. Some people don’t want to hear about it, but others do. [God] said I should share the gospel.”

Jeremiah did indeed die three times. He was also put in several medically-induced comas, which likely kept that number from climbing.

It was during one of these deaths – none of which lasted very long, he and Bridgett both noted – that he caught a glimpse of the afterlife.

According to Jeremiah, the angel Gabriel escorted him through a golden gate to the heavenly mansion he will one day occupy. The gates were encrusted with clams and pearls, while the mansion’s windows were decorated with diamonds. However, he wasn’t able to go inside because it wasn’t time for him to pass away just yet.

He said he also got to meet Jesus Christ and recalls asking for his mansion to be painted blue. Both Gabriel and Jesus were dressed in white and shone so brightly that Jeremiah couldn’t make out their features.

There are times Jeremiah wants to go back. However, the potential to tell more people his story (to say nothing of extended time with family and friends) outweighs his longing for paradise. He’s excited to return one day, and even more excited to turn his tragedy into a testament of God’s goodness.

In the four years since the accident, the Hartmans have discovered that the driver was an older woman who now lives in a senior care facility. She has never reached out to the family.

One of the family’s main struggles has been dealing with insurance. Bridgett didn’t wish to specify the details, but did state that a former coach started a GoFundMe that was extremely helpful.

For Jeremiah, the biggest non-physical obstacle was overcoming his fear of cars. He’s finally at a place where he’s cautious rather than frightened, making eye contact with drivers when crossing a street or parking lot.

Bridgett also noticed a change in her own perspective: she finds herself more trusting, patient and joyful. She even wrote a book, titled “Unstoppable: A Story of Hope,” that will release soon.

“The support we had kept me going. The doctors, nurses and community who rallied around us helped more than words can say,” she said. “[My kids] teach me so much. They’re teaching me now. Life gets hard and you can’t stop. I think God brought this family together – we’ve survived a lot.”