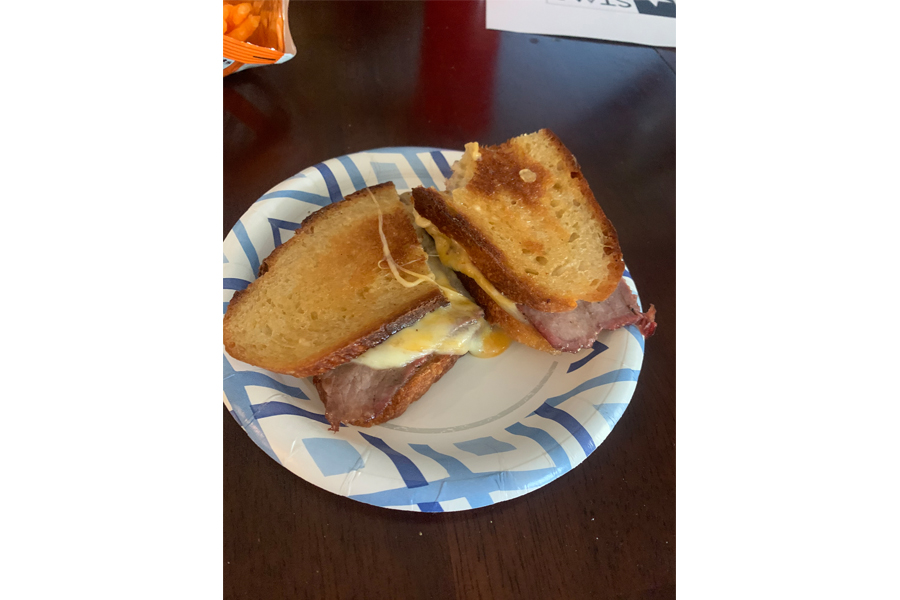 Hundreds of locals are whipping up entertainment and learning that quarantine can sometimes be sweet.

Emily Guynes, a culinary teacher at Wylie High School, has found it easy to transfer her classes online since most people have kitchens. Although she had planned to begin a unit on cooking dinner food, she switched to teaching baking since flour, sugar and the like are easier to come by. That’s when she had an idea.

“I knew I’d have to do online curriculum anyway, so I thought I might as well share it with the community,” she said. “Cooking is one thing that can unite us no matter what. I really enjoy that if you follow the steps and do everything the way you’re supposed to do it, it turns out the same every time.”

And she knows this from her own experience; she spent 12 years as a pastry chef before coming to WHS three years ago. To give the community the same comfort she’s found, she took to social media. On March 25, Guynes began the AHMO Bake Along Challenge from the 544 Café’s Facebook page. She posted a simple sourdough starter, photos of each step (including her 3-year-old daughter helping) and an encouragement to try it at home.

She decided to keep the momentum going by continuing the challenge. So far, culinary students, bored children, amateur bakers and everyone in between have baked sourdough, coffeecake muffins, cheddar drop biscuits, banana bread, snickerdoodles and carrot cake. This week they began learning to make croissants.

Each recipe demonstrates a different baking concept, such as the muffin-mixing method, the creaming method and the rolling-in method.

But for many of those following along at home, the unity baking brings is more important than the technicalities learned.

“I think the kitchen gives us bonding time and my hope walking away from this is [that we’ll be] even closer as a family,” said Wylie resident Ashley Boylan, who’s been following along with her 10-year-old son Cole. “Cole is an only child, so we want him to be self-sufficient when he gets older. He even started doing his own laundry. I hope all we are teaching him and doing with him will create lifelong memories. Memories are the only thing that can never be taken.”

Boylan saw the challenge on Facebook and thought it’d be a good way of teaching Cole about measurements. The delicious results were an added bonus.

Cole did most of the sourdough recipe himself. He’s helped make dinner in the past and wants to continue learning about culinary arts.

Cooking provides him with a welcome distraction from online learning. But his mother is well versed in such demands; she’s a paralegal who has worked from home since August.

His day begins with math and reading, followed by recreation time (usually playing pickleball outside with his dad), and ending with social studies or science. Cole also takes a reading program through Texas Christian University on Sundays.

The Bake Along Challenge gives him a way to bring learning to life beyond worksheets. He’s already tackled the drop biscuits, and coffeecake muffins are in the works.

Boylan noted that Guynes makes the recipes easy to follow and fun to try.

“We’ve enjoyed having another activity while we’re at home,” she said. “I feel very fortunate that we get along so well and that we’re healthy. I’m definitely not missing the rushed life.”

On Guynes’ end, it’s a similar case. Her actual students – about 250 in total – have more time to digest the information they’re getting. She also has time to give them more in-depth information than she would during a normal class period.

Although she enjoys the slightly slower pace, Guynes wishes she could see the young chefs in person.

“I miss getting to interact with them every day, even if it’s just talking about other classes or extracurriculars,” she said. “[Cooking] is a really fun break from sitting all day. That’s one of the things Wylie ISD does well – there are lots of opportunities to move around.”

To follow along with the challenge, see facebook.com/the544cafe or get recipes at sites.google.com/apps.wylieisd.net/whsintrotoculinary/home/bonus-recipes.