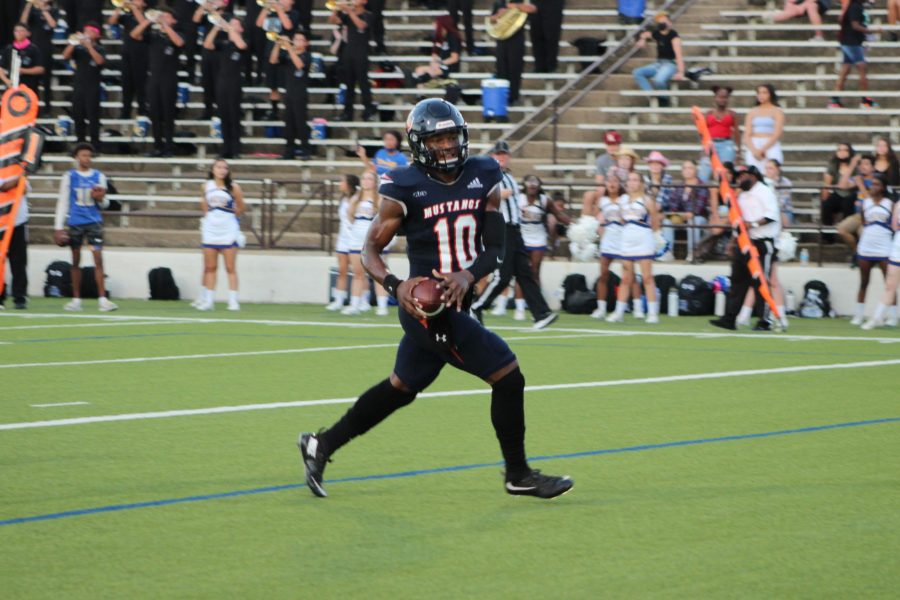 For the second time this season, the Sachse Mustangs scored over 60 points.

Using a high-scoring first quarter, Sachse (3-2, 2-0) outran Rowlett (1-4, 1-1) to a 65-28 victory on Friday night. Leading the way for the Mustangs was Alex Orji, who scored six touchdowns while accumulating 288 yards. Like most Sachse starters, Orji played very little in the second half.

Cam Gladney’s 63-yard touchdown reception brought the team’s total to 58 points in the third quarter and spelled the end for the starters.

Sachse scored five touchdowns in the opening frame, starting with a 9-yard run from Orji. The Mustangs capitalized on excellent field position all evening, averaging four plays per scoring drive. The team had six of their ten scoring drives start in Eagle territory.

Rowlett tried to make things interesting in the second half, scoring two touchdowns and forcing two turnovers against the Sachse reserves. Late in the game, backup quarterback Pierce Foy delivered the final blow on a 25-yard touchdown pass to Kaliq Lockett.

Sachse’s next game is against North Garland on Oct. 1 at Williams Stadium.

For the complete story see this next week’s edition of The Sachse News. Support your community newspaper for less than $40 a year.