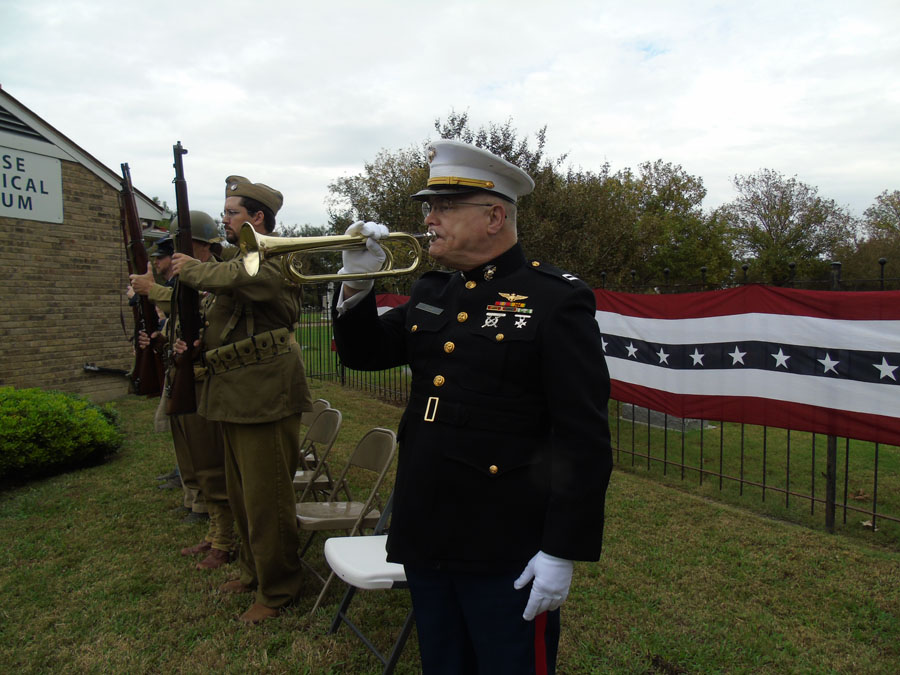 Veterans, military families and anyone in the community wishing to thank those who served will have several opportunities to do so this month.

Sachse and the surrounding cities are hosting Veterans Day ceremonies.

“They can hit this one on Saturday and they can go elsewhere if they want on Nov. 11,” Smith said.

Unlike last year’s event, the ceremony will be open to the public and held in the museum’s yard, unless weather is a problem.

The speaker will be Ariel Pointe resident Jackie Sanzone, who served in the Air Force.

The ceremony will begin promptly at 11 a.m. with 11 chimes from the bell. Smith said they will then have a coin presentation and a Vietnam Pin ceremony.

“We have a few tiny ceremonies,” Smith said. “We try to keep the whole thing under an hour.”

For the coin ceremony, Smith said they pick someone in the community who has lost a family member the previous year who was in the military.

“Sometimes it is active duty, sometimes its someone’s grandfather who served years ago,” Smith said. “One of the members, Bob Soule, buys the coin, which is specific to the branch the person served in, and has it engraved.”

Smith said the Vietnam Pin ceremony is a program that was started by the Department of Defense (DOD) that is meant to honor those who served during the Vietnam years, from 1955 to 1975. Smith said they are able to participant in the ceremony through a partnership with the DOD.

“They may not have served in combat,” Smith said of the recipients. “It is a real nice lapel pin and their name is in a certificate.”

Smith said that the ceremony is well received, adding that many of the recipients have told her that this was the only time they were recognized for their service.

The ceremony will end with a rendition of taps.

“It’s not a recording,” Smith said. “Larry Quave, he comes in all his regalia and plays the bugle. It is a real nice fitting end to the ceremony.”

The event is hosted by the Wylie and Wylie East High School Air Force Junior ROTC and will begin at 10:40 a.m. and end at approximately 11:30 a.m.

The district is also inviting all veterans to a free breakfast at Wylie High School beginning at 9 a.m.

For the full story, see our Nov. 4 issue or subscribe online.