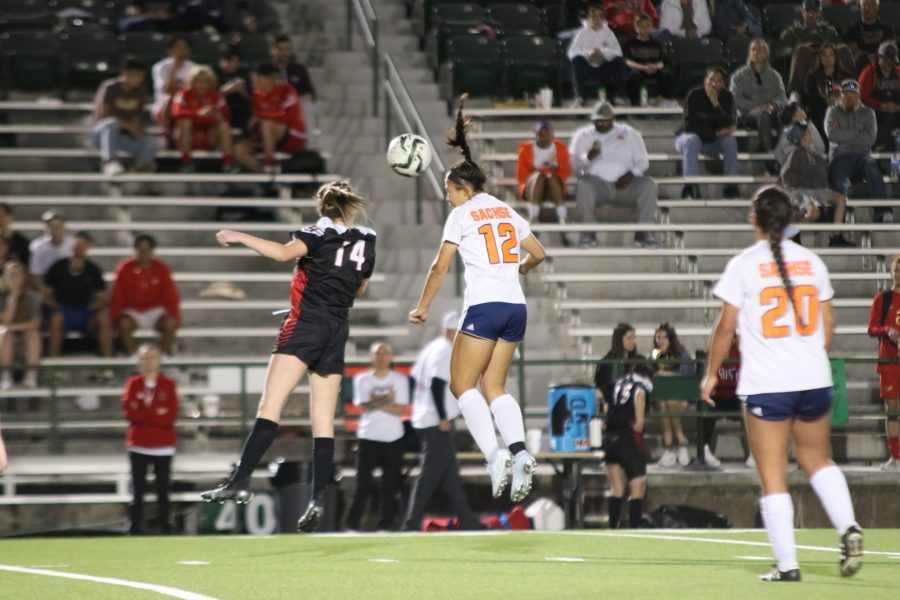 Everybody loves a good comeback victory.

In what was rare territory for Sachse Lady Mustangs soccer, they were forced to come back from a road-game deficit to keep their season and championship hopes alive.

They were able to do just that in the bi-district playoff round against Rockwall-Heath last Friday, Mar. 25. Sachse was able to come back from 1-0 deficit in the first half to capture a 2-1 victory and move on to the area round.

Playing in Mesquite, Rockwall-Heath entered the game 9-10-4 overall and 7-3-2 in district, good enough for third place.

They, just like the Lady Mustangs, were coming off impressive shutout victories, a 12-0 win over Skyline and a 4-0 win over Mesquite.

Sachse was also riding high. After losing to Wylie on February 19, the team had not allowed a goal over the course of a six-game winning streak.

The Lady Mustangs defense was tested early when the Lady Hawks offense pushed their attack early and often. A couple saves by Sachse calmed the storm for a bit, but about halfway through the first half, Rockwall-Heath struck the back of the net to give themselves a 1-0 lead.

Sachse was not fazed, however. Before the first half could come to an end, the team had rallied and knotted the score back at one with a late goal. The momentum had seemed to swing in the Lady Mustangs’ favor prior to the half concluding.

The Lady Mustangs would score the final goal of the night to give them a 2-1 lead. It turned out that that was all that was needed, as the Sachse defense stayed strong, and Rockwall-Heath was unable to cash in on any of their scoring opportunities.

Up next for Sachse is an area round matchup against the Belton Lady Tigers on Tuesday, March 29. Belton went an undefeated 13-0 in their district and finished the regular season 14-3-1 overall.

They beat Midway 3-1 in their bi-district round.

Game results will be posted online at sachsenews.com and a follow-up story will be included in the next edition of The Sachse News.