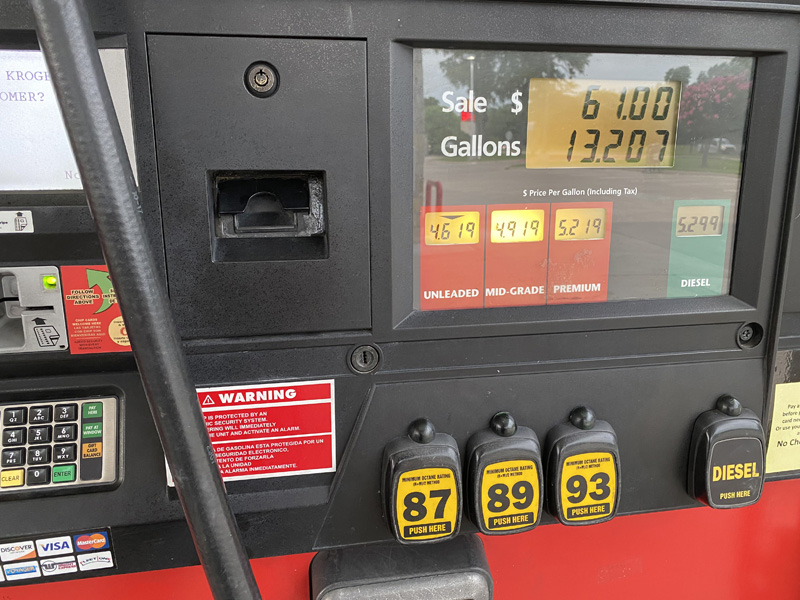 The increased oil demand continues to outpace global supply, resulting in high gas prices across the state, the nation and the world.

As a result, the national gas price average on June 13, was $5.014 per gallon, the highest recorded average price.

According to AAA, the average cost per gallon in Texas was $4.664. The average price for diesel fuel is $5.258 per gallon.

Collin and Dallas Counties were higher than the state average at $4.691 and $4.658, respectively.

California currently has the highest average gas prices at $6.436, and Georgia has the lowest at $4.484.

“It’s likely prices will continue to fluctuate and remain elevated,” said AAA Texas spokesperson Daniel Armbruster. “At least until summer driving season is over after Labor Day or until the issues of tight global supply and demand of crude oil are resolved.”

Armbruster explained that retail prices from gas stations across Texas and the United States are tracked daily by Oil Price Information Service. AAA Texas contracts with OPIS to receive the data.
Historically, high gas prices have not deterred people from traveling during the summer months, Armbruster said, but it does impact daily commuting behaviors by creating carpools or running fewer errands.

However, Armbruster said AAA is currently expecting record-breaking prices to have a ripple effect on some aspects of travel and other economic areas such as goods and services.

“Families may opt to eat out less on a trip,” Armbruster said. “Or stay in a four-diamond hotel instead of a five diamond.”

Recent AAA surveys show that 75% of Americans say they would change their driving habits or lifestyle if the cost of gasoline rises to $5 per gallon or more.

Of US adults who said they would make a change to offset gas prices, about 80% they would do so by driving less.

For the full story, see the June 16 issue of The Sachse News.