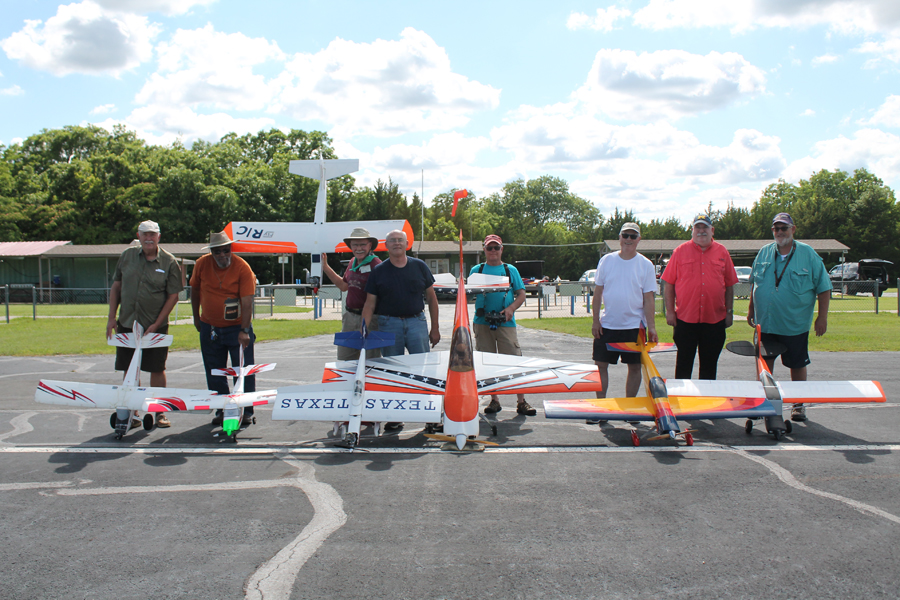 Local aviation and remote control enthusiasts alike fly their aircraft in the skies over a park in Princeton.

The Richardson Radio Control Club (RRCC) flies its planes out of Bratonia Park, located at 6540 FM 546 in Princeton. On a sunny day with fair winds, one or several club members can be found flying their RC planes in the skies overhead.

The 53-year-old club was originally founded in Richardson but the name is a misnomer now because it has been flying over Bratonia Park for the past 27 years, said President Curtis Simmons. The RRCC recently signed a 25-year renewal on its lease from Collin County to remain at Bratonia Park.

Bratonia Park is located near the boat ramp off of FM 546 and is leased by Collin County from the Army Corps of Engineers. The RRCC subleases the location of its airstrip from the county.

The club is also responsible for all maintenance of the facility and construction of any upgrades or improvements, such as its paved runway, are facilitated by members. The facilities also run entirely on solar power and are not on city utilities.

At Bratonia Park, members have built six pilot stations, a grill area, a couple of assembly stations and a main storage building in addition to the paved runway, something Simmons says is rare for a RC club.

“It’s one of the premier flying sites in Dallas and the surrounding area,” said Simmons.

Simmons said the club is the only RC club in Collin County and only one of four clubs in the area. Currently, its membership sits at 151 members and fluctuates between 140 and 160 members, he added. Members come from all over Collin County and the surrounding area.

There are 12 members of the club under the age of 18, said Simmons, and most of the membership is under 65. However, most members join the club when they are in their 40s and 50s as their careers wind down.

Simmons said the club is open to men, women and families but most of the members are men, adding that wives of members will also come out to support their husbands when they fly.

For newcomers, the plane the club recommends is called the “Apprentice” and usually costs around $350, according to the RRCC’s website. However, planes tend to come in different shapes and sizes with wingspans that vary from three feet up to over eight feet.

The foam electric planes, similar to the “Apprentice,” are among the most popular in the RC plane hobby because they are typically the cheapest, which makes them more accessible to prospective members. Simmons says that new members should still test the hobby before buying their first plane.

“We try to caution people to come out and learn to fly for free before buying a plane,” Simmons said. “That way, somebody doesn’t buy a plane and decide they no longer have an interest in flying it.”

If a resident is interested in joining the club, there is a deal with HobbyTown USA in Plano where purchasers of an RC plane will receive a certificate for training with the RRCC.

The club also provides free training to new members to teach them about flying an RC aircraft and advising them on which plane might work best for them, said Simmons. There are nine instructors certified by the club to teach new members.

Members in the club also fly a variety of planes including gliders, propeller planes, jets, drones and helicopters. There are also “warbirds,” planes that have seen combat action during a war, such as the P-51 Mustang or F4U Corsair or civilian aircraft such as the Cessna 172 Skyhawk.

Simmons said there is a good mix of “warbirds” and civilian aircraft flown by the club’s membership.

Because of the airstrip’s proximity to residences, club members try to be mindful of the noise pollution their hobby creates.

“We’re mindful in trying to keep our planes below a certain decibel level,” Simmons said. “We restrict the types of planes our members fly and try not to get above the decibel level of a standard car.”

Simmons said the only aircraft forbidden to fly at Bratonia Park are RC turbine jets because of their noise levels and the runway length requirements. Drones, electric, gas turbine engine, and ducted fan jets are all permitted to fly from the club’s airstrip.

Occasionally, there will also be night flights, said Simmons, adding that members will equip their aircraft with LED lights that illuminate the night sky.

“They look like fireflies dancing around in the night sky,” Simmons said.

Club Treasurer Garry Lundberg said typical club members are aviation enthusiasts, adding some members are or have been pilots at one point in their lives.

“This is a way to enjoy and experience a love of aviation,” Lundberg said. “For some, it’s just a hobby, but it’s also a sport because you can compete.”

Residents looking to get involved have a few different ways they can join the club.

One popular event the RRCC hosts annually is a Try RC Day where the club puts attendees through ground school, a simulator and a flight with an instructor.

Ground school teaches participants the basics of aerodynamics and the impact of physics on the plane. The simulator allows students to experience flying an aircraft without the risk of the consequences of a crash.

The club’s instructor uses what is called a “buddy box” where the instructor and student both have a controller for the RC plane. At any point, the instructor can regain control of the airplane and guide the student through different maneuvers and throttle control.

This year’s Try RC Day had 65 attendees, said Simmons, and the club has had as many as 80 people show up.

The club is also hosting a swap meet in the cafeteria of Allen High School from 8 a.m. through 3 p.m. Saturday, August 20, where residents and club members can buy and sell RC planes. The rental is paid for from the club’s finances, said Simmons, adding that the event is open to the public.

General admission to the swap meet is $5 or families can pay $10 for entry. There is also an auction scheduled from 1-3 p.m. during the event.

Members also host charity events such as a Memorial Fun Fly for deceased club members and organize with local charities, such as Allen Community Outreach.

Residents interested in joining the club can visit the club’s website to find the new membership application. They will also need to become members of the Academy of Model Aeronautics.

New members will also be required to pay the initiation fee and annual dues to the club when they join. There are application forms residents can return during the club’s monthly meeting or the application can be completed online.

Once members complete their application, the club assigns them an instructor.

For more information on the club or to join as a member, residents can visit rrcc.org.