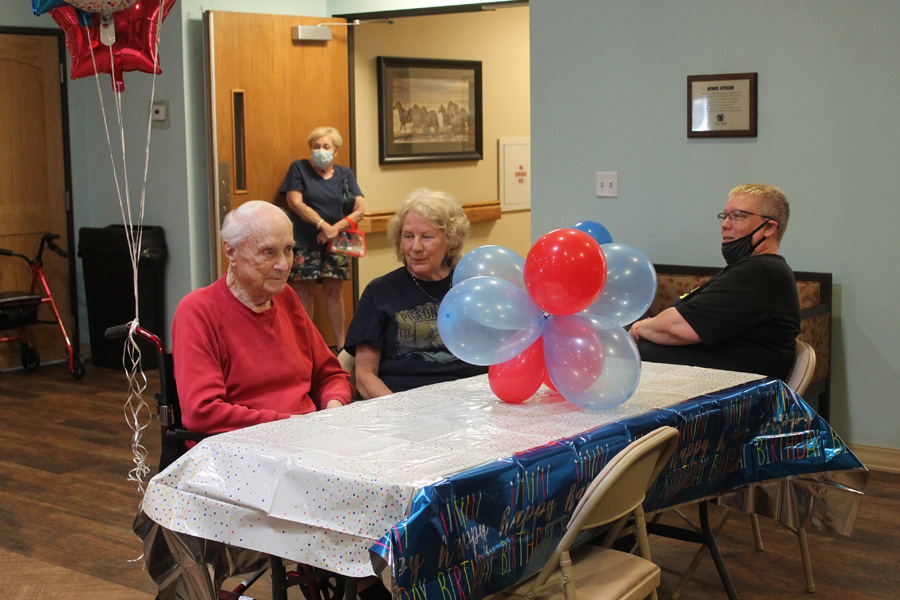 An Oxford Glen resident recently celebrated his 101st trip around the sun with his family and members of the memory care facility.

Robert Snyder said he feels “old,” but not much has changed since his 101st birthday Sunday, Sept. 25. The party held at Oxford Glen took place at 2:30 p.m. Monday, Sept. 26, where he was treated to some live music, a singing of “Happy Birthday” and cake and ice cream.

“I had a really good-sized nice party this week,” Snyder said. “We really had a nice time.”

Before surpassing the century mark, Snyder grew up in Ohio, his daughter, Carol Long said. In Ohio, Snyder was a terrific baseball player, she said, earning a scholarship to play collegiate baseball at Ohio State University.

Unfortunately for Snyder, the United States’ involvement in World War II began around the same time he was about to go to college and he joined the Navy where he became a naval aviator flying rescue planes.

Snyder said he was stationed on the USS Pine Island where he flew checking for general weather conditions as well as recovering any pilots who may have been shot down in combat. He said he flew in the Navy for a couple of years but by the time he returned he was in his 20s and too old to pursue college baseball.

However, he never lost his love for sports, said Carol, as he was able to play golf both left- and right-handed, which he did with his wife, Clara, for many years. He also enjoyed driving, she added, which he did not want to give up.

After returning from the war, Snyder said he pursued a career as a supervisor for the fan manufacturing firm Robbins and Meyers, adding that he worked there for around 35 to 40 years.

While working with the firm, he and Clara started a family and raised two children. His son has since died but his daughter Carol continues to visit him at Oxford Glen where he now resides.

Snyder said, “if you treat kids right, they’ll treat you right.” As Carol was leaving, she kissed her father goodbye, assuring him that they would meet the next day to share a hamburger.

Additionally, Carol said her father was able to maintain his independence up until a month ago when he moved into Oxford Glen. Previously, her parents shared an apartment on her Sachse property until he became a widower following Clara’s death.

“He’s always been very independent,” Carol said. “Up until recently, he did everything by himself including making breakfast every morning. The only thing he would do with us was dinner in the evening.”