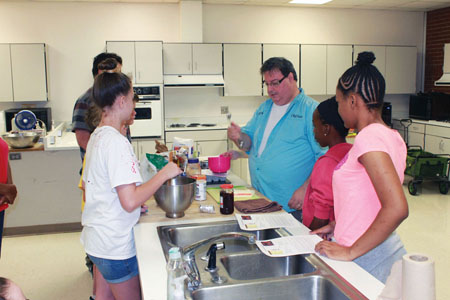 A slew of Garland ISD middle school students, including some from Hudson, recently spent the hot days of July inside the cool confines of Lyles Middle School. Inside there, for about seven hours a day, they spent time learning, but in a more relaxed manner.

They were part of the GISD’s Discovery Days program for middle schoolers, which just completed its second year. During its inaugural year in 2016, the program took place at Bussey Middle School

“It’s basically the enrichment camp for Garland ISD middle school students,” said Cherelle Wilson, who was the principal for the three-week session at Lyles. “Any student who is going into their middle-school years … are allowed to sign up at the end of March and all the way into most of April.”

Using a GISD online program, these middle-schoolers can sign up for classes in science, history, English language/business tract and self-improvement and leadership classes on a one-week basis, which allows them to get a taste of different career paths. It’s designed to assist students in pursuing their chosen career path, and includes courses in the culinary arts.

“In Garland, once they get into high school, they really should have a better or stronger idea of what they want to do as far as a career,” said Wilson, an assistant principal at Schrade Middle during the regular school year. “The great thing about Garland is that we have a new career center (next to Naaman Forest) that is about to open up.”

The Discovery Days learning phase is hands-on, providing students a chance to apply what they’ve learned during the regular school year; that’s particularly true with the science-related courses, such as robotics. Another group, those interested in nature and wild life, traveled throughout the Metroplex to examine and view what they’ve viewed in textbooks.

For the full story see the Aug. 3 issue or subscribe online.