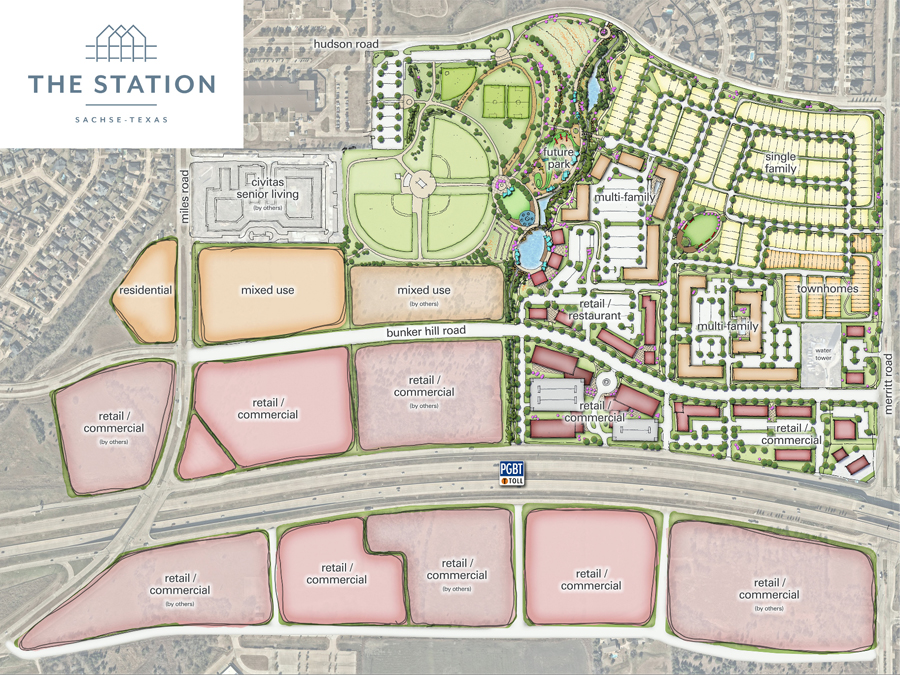 City staff and PMB Capital Investments officials will break ground for The Station Wednesday, July 3. Plans for the 119-acre development has been in the works for more than a decade and will include single- and multi-family homes, townhomes, retail, restaurants and offices. Courtesy art: Ashlar Projects

City to break ground for The Station

A project that has been in the works for more than a decade is finally becoming reality.

The groundbreaking ceremony for The Station, a 119-acre mixed-use development along the President George Bush Turnpike (PGBT), is set for Wednesday, July 3.

City council will celebrate the occasion with representatives from PMB Capital Investments, the developers in charge.

“This is a project the city has been working on for about 15 years, trying to spur development along 190,” said Taylor Baird, a PMB partner. “We’re here to celebrate a big occasion. All those years are paying off.”

Plans for The Station include 300 multi-family units, 250 single-family units, townhomes, parks and space for restaurants, offices and retail.

Before construction can start, the area requires better infrastructure, especially regarding drainage and roads. Baird explained that the groundbreaking will kick off construction of infrastructure projects rather than actual buildings. This will be the first phase of the development, anticipated to open in late 2020.

Once infrastructure is completed, construction of 164 of the single-family homes and 59 of the townhomes will begin, all built by Ashton Woods Homes and K. Hovnanian Homes.

PMB acquired The Station in late 2017 after city council led an initiative to bring their plans to life. The developers worked – and continue to work – with city staff to ensure a development that fits in with the rest of Sachse.

“It’s a mixed-use project, so it will have different uses for different people at different stages of life,” Baird said. “Some will come for unique retail opportunities. We hope some will come because their offices are here. Others will be there because we offer homes with unique amenities and features.”

Council has worked for several months on moving forward with The Station. They approved the creation of a Tax Increment Financing Reinvestment Zone (TIRZ) on the property last fall, formed a TIRZ board in December and approved a Public Improvement District along PGBT in January.

The Station will cost a total of $250 million. The TIRZ will help pay for this – homes in the development will have an additional tax on top of their city taxes.

Although plans are not confirmed, council and developers have discussed adding an adventure playground, splash pad, walking trails and amphitheatre in the future.

“Everyone is pretty enthusiastic,” Baird said. “With growth there are always some growing pains. One of the great things about Sachse is how people are so involved. We won’t make everyone happy, but people seem to be excited about what it’ll bring. Breaking ground represents actual progress. It’s been on paper for a long time with no tangible action. It’ll take awhile to construct, but when it’s open it’ll be a great asset.”

Coverage of the groundbreaking ceremony will be in the July 11 issue of The Sachse News.