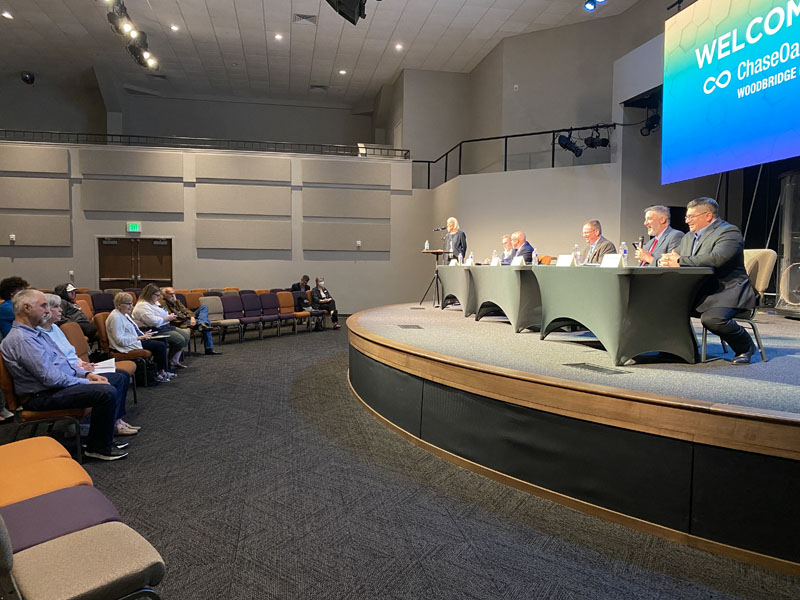 Candidates made their final pitches to Sachse voters in a forum ahead of the May elections.

The forum was held from 7-8:30 p.m. Wednesday, April 20, at Chase Oaks Church-Woodbridge Campus and hosted by The Sachse News and moderated by the League of Women Voters of Collin County.

Every candidate was invited to the forum and only Lindsay Buhler, who is running for Place 5, was absent.

Each candidate was allocated one minute for opening remarks before questions from the audience were posed to the candidate by the moderator. Buhler’s opening remarks were submitted and read during what would have been her turn in the speaking order.

Mayoral candidate Teddy Kinzer said he was running as “a mayor for change.” He also highlighted his service on the Sachse Economic Development Corporation and other civic organizations, such as The Sachse Historical Society board of directors.

Jeff Bickerstaff, who is running against Kinzer, spoke about his history on council since 2013 and the progress of the city. He said he hopes to continue the city’s accomplishments if elected mayor.

Buhler’s statement said she wants to bring residents and their city government closer together through better communication. Like Bickerstaff, she also hopes to maintain the city’s progress and continue to grow.

Spencer Hauenstein, who is running against Buhler for Place 5, said he has been involved with city boards and commissions since 2004, most recently serving as president of the EDC. He said he got involved in volunteering for city positions to pay back his advantages in life.

Matt Presentberg, a candidate for Place 6, spoke about his experience on various city boards. He graduated from the United States Military Academy at West Point with a bachelor’s degree in engineering.

Adrian Rodriguez, who is running against Prestenberg, said he witnessed the city’s growth and wanted to get involved in helping the city grow in the right way. He also mentioned his work experience and service with the Knights of Columbus.

During the forum, candidates answered 15 questions each.

For the full story, see the April 28 issue of The Sachse News.