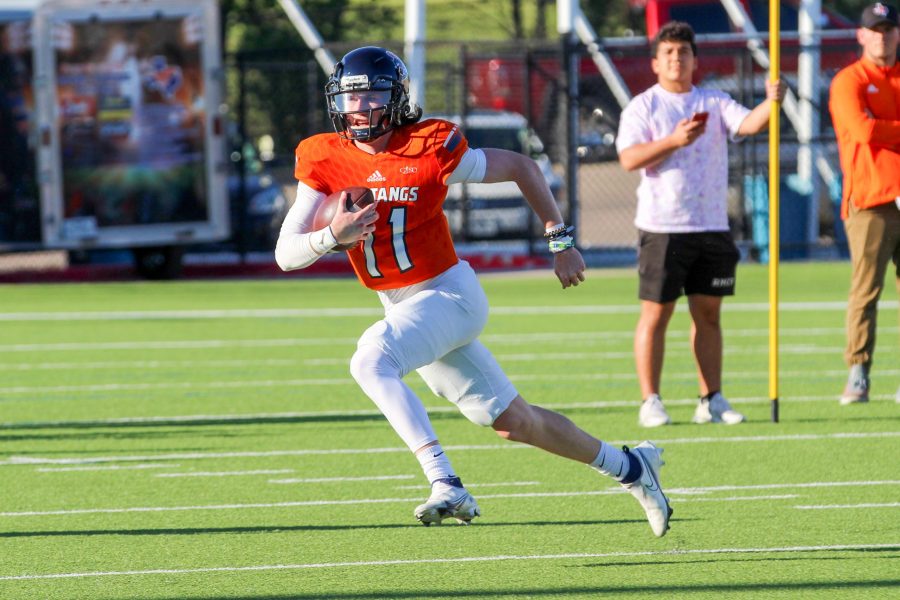 The Sachse Mustangs concluded a spring football season with their annual spring game, setting up the unofficial start to the 2022 season.

“We have a good amount of kids returning to the team defensively and we feel like we have enough experience there,” Behrens said. “There’s still a large amount of space we need to improve, but we like the guys we’ve got and I expect us to be better.”

“The defensive backs are going to be one of our strengths,” Behrens said. “We’re a solid two players deep at both cornerback positions and we’re very athletic. We feel like we’re going to continue to get better around them.”

One area where Sachse is still rotating its players is on the defensive line. Two-time all-district player Albion Krasniqi was one of three seniors to graduate from that group, creating plenty of questions. Jaron Counts had two sacks last season, likely taking Krasniqi’s spot, while Amechi Ofili leads a young group of defensive ends for the Mustangs.

“It’s an ongoing project to replace that spot,” Behrens said. “We’ve got one solid returner from last season but the middle of the defense line is important. We’ll continue to grow and get bigger, but our goal is probably to play a faster game and allow these kids to try and be quicker than guys on the offensive line.”

Offensively, Sachse replaces several seniors across the board. The team averaged 42 points per game last season but is looking to replace several offensive linemen, their starting quarterback, running back and top two receivers.

“The offense is still a work in progress but we’re healthy which is a bonus,” Behrens said. “The offensive line is developing and we’ve got a great quarterback battle. The key to this offseason is to create more depth. We need to get bigger and stronger and be ready to play varsity football at a high level.”

One area Sachse is looking at strength is their depth at wide receiver. While Jamari Harts and Cam Gladney both graduated as the leaders in yards receiving, Jhett Creel, who did not suit up in spring while recovering from baseball season, leads a young group of talented receivers.

Kaliq Lockett leads a group that coach Behrens is excited about. The rising sophomore made an impact late in his freshman year, catching three touchdowns, and is already gathering offers from Utah and SMU. He and fellow rising sophomore Santana Quinn figure to be major parts of the team this season.

“The young receivers are solid,” Behrens said. “They’re going to continue to grow physically and mentally this summer, but Kaliq was 14 until last December going against 18-year-old kids. He’s going to be someone to watch this season.”