Massive destruction, lives lost and millions of dollars of property damage – these are all things North Texans are dealing with as they try to catch their breath from a weekend of unending severe weather.

What started as a severe, supercell thunderstorm in the North Texas area ended up as a monster EF4 tornado with wind speeds up to 140 mph Dec. 26.

There have been nine confirmed tornadoes as part of this storm, according to information released by the National Weather Service.

The tornadoes originally began dropping in Garland and Rowlett. This tornado left eight dead, all located at Interstate 30 and the Bush Turnpike. Some were found in their overturned vehicles, others were found nearby.

Sachse residents dodged the EF4 bullet as the massive tornado swept over the area causing “unprecedented damage” in Rowlett and a small part of Garland. The path was 40 miles long and was responsible for 11 fatalities throughout North Texas. The tornado had winds up to 125 mph. 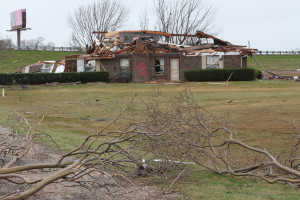 The tornado that swept through the area Saturday night took most of the roof off this house on Business 78 in Copeville.